Juliana’s Animal Sanctuary advocates for a non-violent world through advocating for veganism and promoting equality for all beings by setting an inspiring example of animal care for rescued domestic and farm animals through first class caring and advocacy.

Juliana’s Animal Sanctuary is the first sanctuary in Colombia for animals that are considered food.

We are the first sanctuary established in South America and are currently the only one in Colombia. We are fully certified by the Global Federation of Farm Sanctuaries.

Juliana’s Animal Sanctuary was founded in 2006 in Colombia. However, the project has its roots in Juliana’s initial desire to save all the world’s animals when she learned about the suffering of animals as a 5-year old girl.

When Juliana was 5 years old she decided to stop eating meat when she found out that hamburgers were not born in trees, that burgers were cruelly murdered animals. From that day Juliana felt the need to help those innocent victims: The Animals. And so it was that at this young age she rescued dogs from the street, took them to the apartment where she lived with her parents and took care of them until she found them a home. When she was 11 years old, her school teacher asked her what she wanted to do in her adulthood. Juliana without hesitation said, "I will buy a very big place to save all the animals!" But Juliana is a person of action rather than words. At age 11, she started saving money selling things at school so she could buy a large piece of land and begin her dream, and she did! It was the first sanctuary for animals in the country of Colombia, and at that time was the only one in all of South America. Since then she has been working hard for the last 15 years with her team. In pursuing her dream, Juliana faced numerous challenges, including a public that did not even understand the meaning of a sanctuary, legal battles for her land, lack of funds, and overwhelming demand of animals in need.

The years have passed, and Juliana and her team have rescued more than 700 animals of all kinds. The sanctuary has grown and has become an organization that not only rescues animals but has strong educational programs to change the way people see animals. Juliana has managed, thanks to her husband Paul Turner, to take the sanctuary to an international level so that everyone knows the situation of the animals in South America and is aware that these animals need help, too. Juliana's Animal Sanctuary has since become a non-profit entity registered in the United States.

Juliana still devotes her life to the sanctuary, where she lives with some volunteers, rescuing and taking care of rescued animals, giving talks on a national and international level, and bringing the reality of animals that are used as food to schools and other entities. Juliana will not rest until everyone knows the reality that the animals used for food go through, and she continues to teach respect for all beings to all the human hearts she encounters.

How It All Started

From the innocent vision of a young girl to the manifestation of South America’s first animal sanctuary.

Juliana was 11 when she first envisioned a safe haven for animals in Colombia. She began saving money from selling cookies and cakes at her school.

Juliana had been saving all throughout her college years and finally had enough money to make a downpayment on a plot of land.

First rescue of a farm animal

Juliana had already rescued many dogs and cats but now she rescued her first farm animal, Gita the cow, whom she saved from a slaughter house. 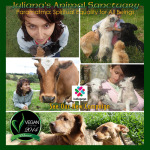 Juliana had to move the animals to a temporary rental property for 2 years. 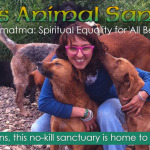 Juliana was able to secure funding to purchase a new plot of land and expand the sanctuary’s ability to rescue animals. We now have over 120 animals under our care. 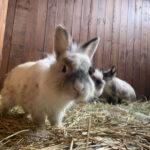 Our animal population has expanded to over 250 under our care after having to rescue many smaller animals from an abandoned project.