The reality in South America is no different from most countries — the abuse of all kind of animals is enormous. In this part of the American continent, there are lots of social problems, so animal issues are not on the government agenda.

Abuse of Farm Animals by the Numbers

In Colombia, a person can kill an animal in their home and not have to report it to the government.

The farms that produce meat have animals such as chickens, pigs, cattle and other animals that are gestated, raised, and fed in overcrowded conditions, and housed and immobilized to fatten up quickly until they meet the preferred height and weight suitable for “human consumption”. They are then transported on a torturous journey for slaughter, that is often worse than then the conditions they came from.

In the egg-producing farms, hens are also overcrowded into small cages, debeaked and forced to put out an unnatural quota of eggs under 24 hour spotlighted sheds. Once past their youth or “production efficiency”, however, they are also transported to the slaughterhouse.

On the dairy farms, cows are forced to give birth to calves in order to produce milk. The calves are snatched away from the mother, reared for veal on an iron-deficient diet, kept in small cages out of the sunlight and killed as early as 6 months. Or if they are females, they become part of the dairy farm milk production like their mothers. If they do not meet the required milk production quota, they are transported to the slaughterhouse. Colombia has 280 slaughterhouses.

Read about our animals and the people who help us. 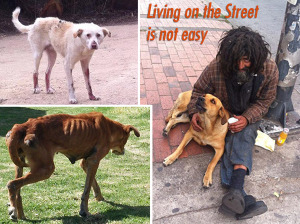 Bogota has more than 350.000 street dogs at any one time. To manage this overpopulation of street animals, there is a government-sponsored office called Zoonosis that takes them from the streets. This office has a direct order from the government to kill at least 400 dogs and cats a week (an estimated 25,000 of them a year) in order to cull the expansion of these unwanted dogs and cats.

It is very important to educate the people of South America about the reality for these unwanted street animals and all the other millions of farm animals they call ‘food.’ Most people have no idea of the reality and so an important part of our mission is to raise awareness and bring about a real shift in perception.

Once people do understand, they would not only see the value of farm sanctuaries, but we believe would help to bring about a world that itself is a sanctuary for all sentient beings.

Help us continue this important service of rescuing and protecting animals here.