Home Veganism What is the Best Diet for Humans? 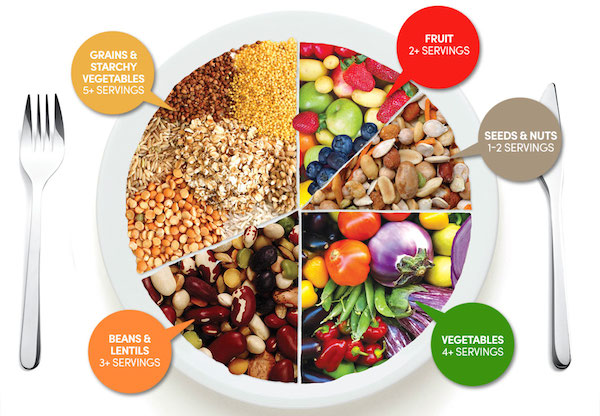 The human body was not designed to consume meat or dairy. Through statistics, studies, and other sources I will show you that the health concerns, animal treatment, and the impact animal agriculture has on the earth is not worth a burger here and there. Let’s start by simply proving that humans are herbivores, not carnivores or omnivores. Humans and other plant eaters have flat, wide teeth that are used for chewing and grinding their food while carnivores and omnivores only have sharp teeth that are used for ripping and tearing. Carnivores normally swallow their food whole while herbivores chew. Carnivores and omnivores also lack molars which are present in all herbivores. Humans also lack sharp claws and have opposable thumbs, which is better suited harvesting vegetables and fruits than hunting prey.

Now the human digestive system. Meat is dead flesh and flesh begins to decay almost instantly upon death. This process is known as putrefaction. When the rotting meat is consumed, it poisons the body (The Great Law, Professor Hilton Hotema).  In order for the human stomach to break down meat, it must be high in hydrochloric acid. The stomachs of humans and herbivores produce less than one-twentieth of the acid produced by carnivores. Because we cannot digest meat properly our pancreas must unnaturally produce more hydrochloric acid. This weakens the pancreas, inviting disease and sickness. After the meat passes through the stomach it goes to the intestines. Humans take about 12-18 hours to digest their food while carnivores take only 3 hours. This is because herbivores digestive systems need more time to excrete nutrients from the food. When meat passes through it does high amounts of damage to your kidneys, liver, and large intestine. When the rotting meat slowly passes through your intestines it releases a great number of toxins. Also, when your body tries to pull out the nutrients from the meat is only excretes poisons, carcinogens, and blood. This is all filtered through the livers and kidneys. The toxins are so strong and damaging that your kidneys have to work extremely hard to get it out of your system. The kidneys of a meat eater have to work 3 times harder than the kidneys of a vegetarian. This causes kidney failure and kidney disease. Young people’s kidneys can cope with the added stress but as one grows older their organs become weaker. Another fact is that carnivores eat their meat raw; humans prefer their meat cooked, but cooking it destroys the natural enzymes that aid a carnivores digestion. This means our pancreas also has to unnaturally produce these enzymes to pass the meat. When you eat animal flesh your stomach, pancreas, liver, and kidney are all over working and weakening.

Now the animals themselves. Factory farms are extremely cruel and unsanitary. All day animals are kept in cages, some are in cages their entire lives. Many animals throughout the day are beaten, punched, kicked, stabbed, and tortured. They feed these animals growth hormones in their food to make them grow bigger, faster. This causes premature aging, exhaustion and most commonly they animal will grow so big that it’s legs cannot support them anymore and they break. These animals whom legs are broken cannot get to their food and die because of it. But by any means, they will still be sold as “Premium Quality Meat”. When these animals grow big enough it is time for them to be sent to slaughterhouses. Depending on the animal they are either grabbed by the legs and thrown into the trucks or pushed in with electric sticks. These animals go days without food or water when being transported to slaughterhouses. In the winter, it’s not uncommon for the animals to freeze to the inside of the trucks which they are then pried off with crowbars. In the summer, a lot of the animals die of dehydration and heat exhaustion. When they arrive at the slaughterhouses they are taken off the same way they were put on. Slaughterhouses are visions of hell. Screaming animals are stunned by hammer blows, electric shock or concussion guns. They are then hoisted alive into the air by the feet and moved through factories on a mechanized conveyor belt systems. Their throats then slit and they are boiled and dismembered. According to a McDonald’s training video, it is acceptable if 5 out of every 100 cows are conscious while being skinned and boiled, but the real rate may be more than 5% percent.  The animals go in terrified and come out chopped up into pieces. The FDA also has no laws on treating sick farm animals. These creatures spend days and weeks standing in their own feces and urine and they contract disease and sickness from it. But to the industry it doesn’t matter, these animals will still be killed for beef no matter what sickness or disease they have.

The meat industry will tell you lies about how you need meat for protein and how it builds muscles. During digestion most protein breaks down into amino acids, which are then used by the body for growth and tissue replacement. Of the twenty-two amino acids, the body can only digest 8 of those. The rest are produced by themselves in our bodies. These 8 “essential” amino acids exist in abundance in nonflesh foods. Grains, beans, and nuts are all concentrated sources of protein. Peanuts and lentils, for instance, contain more protein per ounce than a hamburger. Furthermore, a study done by Dr. J. Iotekyo and V. Kipani at Brussels University showed that vegetarians were able to perform physical tests 2-3 longer than meat eaters before exhaustion, and were fully recovered from fatigue in one-fifth the time needed by meat eaters. “Nothing will benefit human health and increase the chances for survival of life on Earth as much as the evolution to a vegan diet”- Albert Einstein