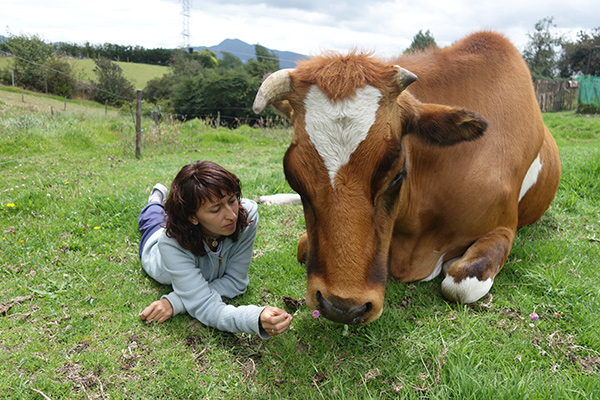 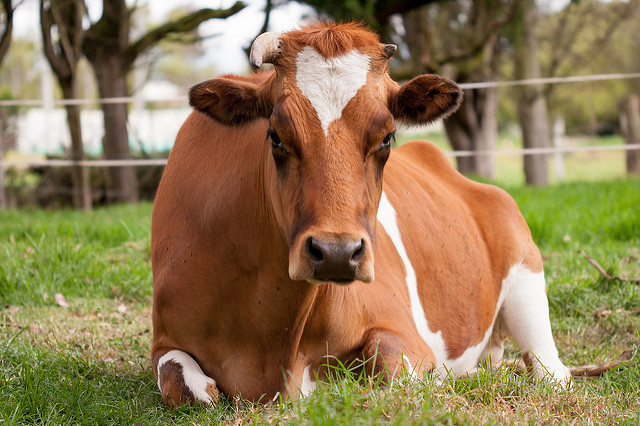 Balarama really is a giant. When standing his shoulders are close 6 feet high and he must weigh well over 1500 pounds, and yet, he is the sweetest thing. He is my ‘big boy’ and I love him so much. You’ll notice that he has a very distinctive mark on his forehead — a love heart!!!

The story of Balarama’s arrival at our farm is a sad one, but also a day to rejoice. He was the son of a dairy cow that escaped to our farm. His mother broke through the fence and came to our farm distressed, looking for a safe haven to give birth to her new calf. Instinctively, she knew that if the calf was male he would be killed within months, and if female it would be destined to the same abuse she was now undergoing. Within a few hours of her arriving at our farm she gave birth to a little male calf. The farmer then arrived and was about to take the young calf away but we pleaded with him to allow us to keep him. We paid him $100. Sadly the farmer took the mother away and our new calf, Balarama, never got to see his mother again. Essentially I became his new mother although this is not the right course, he must have lived with his mother and take the milk that his mother had for him. But Balarama from day one had to take fake milk, and having a human mother. 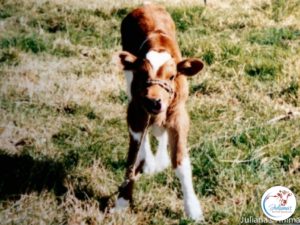 It was one of the rescues that caused me more pain,because I saw from the first time and in real how this horrible dairy industry take a mother away from her child while both wept and called each other to be together.
It’s been over 10 years and still I have these oainful images in my mind and my heart.
Balarama has been raised with love and he is a happy ox who enjoys hugs, kisses and beautiful sunrises. 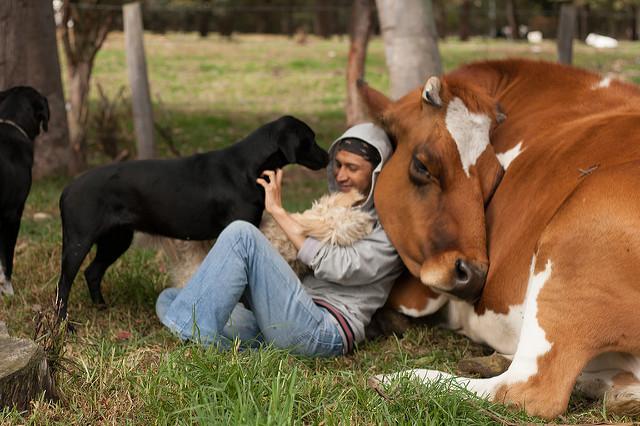 Balarama is happy grazing all day like most cows or bulls, only he has the reassurance that he will never be killed and will live a long and natural life. Most people are unaware that cows can live as long as 25 years, but sadly most dairy cows only live for 3 years. Another odd thing about our modern society is that most people have never seen a cow or bull in the flesh. These docile and kind animals that serve humankind unconditionally are often kept away from public view in crowded feedlots. When people get to see and pat these gentle giants they are overwhelmed with joy and typically feel conflicted afterwards about their decision to eat meat. I am sure that if you ever got to meet Balarama you too would fall in love.

Balarama is being Popular in the media! Read more   THE DODO      ONE GREEN PLANET 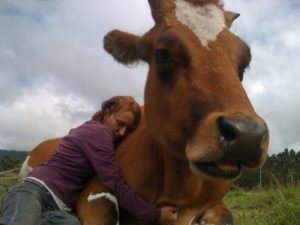 Balarama need hay most of the time ( he is really big) and some grains and as you can imagine he drink LOST of water. Monthly he need around $100 dollars to cover all his needs (not veterinary needs, so far he is super healthy). You can be part of his freedom and his happiness. ANY COIN is a blessing for the animals in Colombia, please don’t feel that $5 dollars is nothing, is a lot! we need few sponsor for him 😀 as you can imagine. PLEASE HELP HIM

You can turn those $5  from being a small cup of coffee to be the freedom and happiness of an animal that suffered a lot.

You are his real super hero.

If you want to sponsor him, just check our options 🙂 , you will received monthly info and special photos from him in your email and and a letter acknowledging you as his sponsor in your correspondence address. THANK YOU!