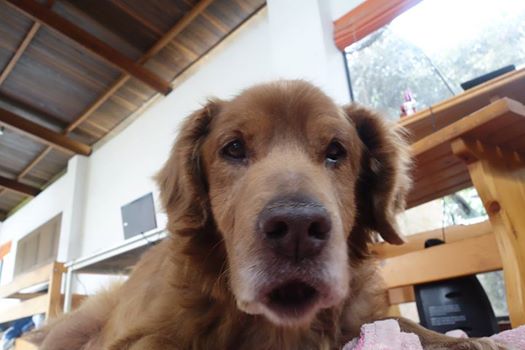 This is Bhisma doing a funny face for the photo. Bhisma is 18 years old, and is our oldest dog in the sanctuary.

Bhisma’s original owner had him since birth, but one day he became so poor that he had to move from where he was living and take Bhisma to another house far away. But Bhisma was so sad without his human father that he ran away and walked 2 days until he finally returned to his old house. Sadly the house was empty, but Bhisma waited there for 4 days hoping his human father would return. It was then that I found him, alone, tired, hungry and very confused. I took Bhisma to my house and began caring for him. At first he was very sad, but then after I bathed him he became all spritely and happy again. Then 2 weeks later, the original owner knocked on my door and he was so happy to see Bhisma. But with tears in his eyes he begged me to take care of his dog, because he could not afford to and didn’t have a place to live. All he cared about was the welfare of his beloved Bhisma.

He is a very happy dog. He loves to play, eat, sleep, and even likes to take his medicine. In our sanctuary we like to help older animals, because many people forget that they also deserve respect, love and happiness at the end of their lives. We like to give the BEST to our animals until the last second. Bhisma has arthritis and finds it very hard to walk and sometimes falls over, or his back legs give out and he does the splits and we have to pick him up. But he never gets discouraged and is always ready to offer a lick and a smile to anyone. The original name of Bhisma was “Danger, but I decided to call him Bhisma after the great grandfather Warrior from ancient India, who was loyal and chaste to the very end. We love him so much.