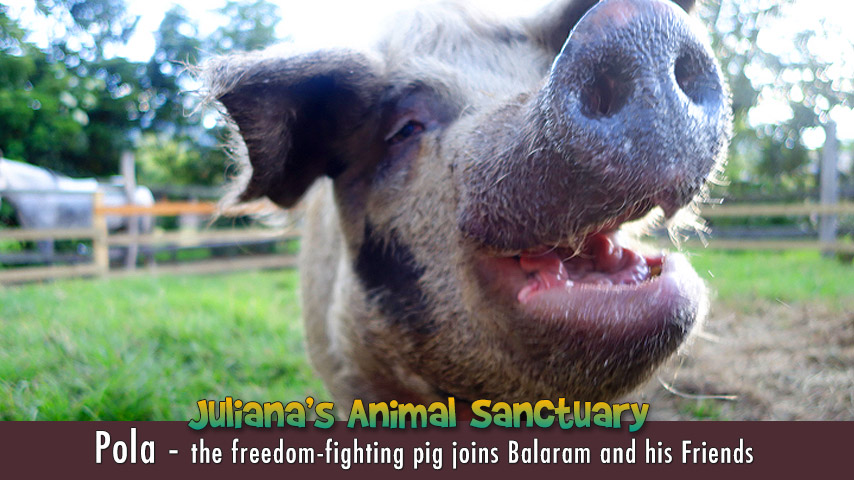 Pola, the “freedom-fighting pig” is the newest member of Juliana’s Animal Sanctuary — the only sanctuary in Colombia.

For the last 8 years, Pola was living in utter filth, amongst 180 uncaged hungry dogs who constantly harassed her and sometimes tried to tear pieces of flesh from her body. Sadly, they did eat her tail off and parts of her vulva! Pola had no clean soil or grass to play on, but lived amongst garbage and dog feces and was only being fed cheap dog food (that contained pork!).

But she never gave up hope that one day she would be rescued from this hell and be loved.

When I found her I cried in pain. Her so-called “caretakers” told me that if I didn’t take her she would be killed. It took me 4 attempts to get her to our sanctuary, including hiring a truck for 4 consecutive days, as well as 13 men, and then building her a new enclosure and home on our farm. But we finally did it and amazingly it was on Colombia’s Independence Day, July 20th! And that is why we named her Pola – in honor of “La Pola” the Colombian teenage freedom-fighter.

Pola now joins Balaram, the “gentle giant” and his friends at our sanctuary.

See photos of where Pola used to reside.

SUPPORT HER CAMPAIGN AT: www.youcaring.com/pola