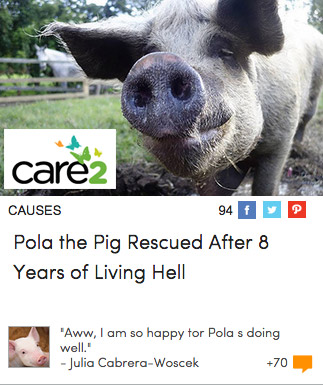 Pola the freedom-fighting pig was rescued from a horrible living situation in Colombia not once, but twice. Hers is a tragic tale but ends well, and the woman responsible for saving Pola is an inspirational example of just how much good one person can accomplish with enough hard work and sheer determination.
When I first learned about Pola’s horrible plight, I knew only bits and pieces; that she had lived in Colombia for eight years in hellish conditions, literally getting her tail eaten off by dogs, before being rescued and brought to an animal sanctuary to live out the rest of her life in peace.

What I didn’t know at the time was that Pola had actually been rescued before, and the woman who rescued her the second (and final) time, Juliana Castaneda Turner, is a Colombian activist who fights and wins for animals in her homeland, a country not known for its ethical treatment of animals.

I reached out to Juliana in Colombia to get Pola’s full story. When she wrote back, she was apologetic about her English skills; “I risk to write to you in my funny English.” Then she proceeded to explain (paraphrased below) how Pola ended up as the newest member of Juliana’s Animal Sanctuary, the only farm animal sanctuary in Colombia:

Pola was “rescued” 8 years ago from a truck full of baby pigs. The woman who rescued her fell in love with her because she has freckles. This woman has a dog shelter in Colombia, but even though her intentions were good, she had more than 300 dogs living in poor conditions.

Basically, it was not a safe, healthy place for a pig to live. Juliana explained how the government in Colombia doesn’t do anything to help animals there, so those who try to help animals are pretty much on their own in terms of funding their efforts to help animals.

The woman who was swayed by Pola’s freckles ended up losing the space where she kept all of the animals, so when Pola was 4-years-old, she was moved to another dog shelter, which sounded no better than the first place. It had 180 dogs living in — you guessed it — terrible conditions, and there was no fence to protect Pola from the massive quantity of dogs; that’s where her nightmare started, according to Juliana. See Photos

Juliana’s Sanctuary shares what happened to Pola the pig:

For the last 8 years, Pola was living in utter filth, amongst 180 uncaged hungry dogs who constantly harassed her and sometimes tried to tear pieces of flesh from her body. Sadly, they did eat her tail off and parts of her vulva! Pola had no clean soil or grass to play on, but lived amongst garbage and dog feces and was only being fed cheap dog food (that contained pork!). But she never gave up hope that one day she would be rescued from this hell and be loved.

And that day eventually came. Amigos del Planeta, an organisation in Colombia that helps dogs, cats, and some horses, was contacted by the shelter where Pola was living. Apparently Pola was no longer welcomed at the dog sanctuary because, as Juliana tells it, “they said the pig destroy everything there.”

Whatever it takes, Pola! Destroying everything was probably the best thing she could’ve done in that situation, because it convinced her detainers to get rid of her.

Amigos del Planeta doesn’t take pigs, so they turned to the only farm animal sanctuary in all of Colombia for help –Juliana’s Sanctuary, which agreed to take Pola in.

It took many tries and a lot of back and forth hassle and money spent before Juliana and her team were able to get Pola to her new home, but thanks to Juliana’s perseverance, Pola finally made it. She says:

When I found her I cried in pain. Her so-called “caretakers” told me that if I didn’t take her she would be killed. It took me 4 attempts to get her to our sanctuary, including hiring a truck for 4 consecutive days, as well as 13 men, and then building her a new enclosure and home on our farm.

Pola was rescued on July 20, Independence Day in Colombia, so they named Pola after Policarpa Salavarrieta, “La Pola,” a Colombian freedom fighter. To those at Juliana’s Sanctuary Pola will always be known affectionately as “the freedom fighting pig.”

Now she gets to eat fruit, her favorite, instead of dog food. She is able to bask in the sun and enjoys the occasional splash of water on her body. She is not in perfect health yet, but she is getting better, thanks to Juliana and the rest of the folks at their sanctuary.

See Pola for yourself: Watch this video for more about Pola the freedom-fighting pig: Juliana became a vegetarian when she was just 6-years-old and vegan nine years ago when she started her sanctuary. As she tells it, “I dream (of) this since I am a little girl, at 12-years-old, I started to save money to buy the farm of my dreams.”

She’s had to contend with legal battles over land, frustratingly sluggish bureaucracy, and bribes and intimidation, which she says are common in Colombia. Now she’s grappling with the task of securing a new space for the sanctuary and its 66 farmed animals, cats and dogs to call home.

But that’s not stopping her from saving animals. She’s rescued another pig since Pola – a piglet actually—named Perla. She was discovered in the garbage with a broken leg.

To learn more about Juliana’s work to save animals and find out how you can get involved visit www.julianasfarm.org or like them on Facebook.

Pola was eventually rescued, but after years of suffering. If someone had noticed the conditions she was living in and contacted Juliana sooner, some of that suffering may have been prevented.