Last year there was a government intervention in the marketplaces of the city of Bogotá, where live animals were sold for consumption and exploitation. This is a practice that has been going on for many years in the country, where many families still preserve the culture of sacrificing certain species to celebrate holidays.

When the pandemic arrived, and with it the confinement measures, these animals were abandoned and locked up in tents, in the most miserable conditions that a living being can have. This caused them serious illnesses, leaving some in a terminal state. 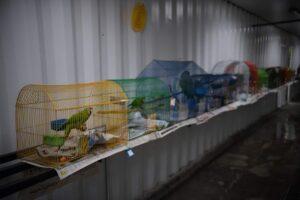 The city government made the decision to free those who were there, however, not having a serious institution to give them true support, they decided to go to the sanctuary to take care of them. Of course, they did not give any kind of contribution and only helped to take the animals to leave them in the hands of Juliana.

Although this helped to bring about some progress in the political sphere, since it is now (in theory) illegal for living beings to be sold in market places, this situation happened again this year. Again the government took action, but they still do not have the means to respond to these emergencies.

Therefore, once again, they did the same: take the stranded animals to the sanctuary. Until there is a real institution that can welcome species that are not considered pets, there will not be a serious debate to continue advancing in matters of releasing other species.

For this reason, Juliana’s Animal Sanctuary is so necessary in Colombia, it is imperative that more and more people have different perspectives regarding the impact they can have on the environment, simply with a change in habits. To prevent stores like these from continuing to exist, so that Colombians can learn to hold their celebrations without having to abuse anyone.