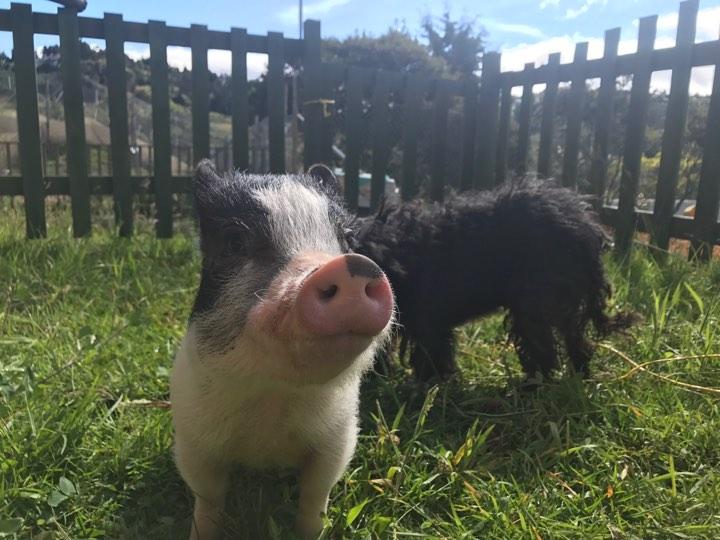 There’s a side to pigs that some people don’t see because they picture these animals in a completely different way. When pigs are in their natural habitat, they’re some of the most fun, playful, and interactive animals you’ll ever meet. They are known to be very social and can even recognize names given to them. When observed closely, you can even see how pigs are empathetic towards other pigs that are either happy or stressed.

According to Cambridge University professor Dr. Donald Broom, pigs are more sophisticated than dogs and three-year-old children with their amazing cognitive ability.

However, when most people think about pigs, they picture these animals living in factory farms and transported to slaughterhouses to be processed for consumption. Instead of living a full lifespan of 15 – 20 years, pigs are slaughtered just after six months of age, and the journey to that end can be terrifying, to say the least.

What is a pig slaughterhouse?

A pig slaughterhouse is essentially a facility where pigs are killed for human consumption. From the factory farms, at least 121 million pigs are taken to slaughterhouses to be processed for meat each year.

The practice of slaughtering pigs has been around for many centuries. Pig slaughter is a known tradition in many European countries where people usually do it during the autumn and early winter, since these are the times of the year when they can afford to do so.

Do pigs feel pain when slaughtered?

Over the years, the process of pig slaughter has evolved immensely to keep up with the huge market demand for meat. However, industrial pig slaughter also exposed bad practices where these otherwise social and smart animals are treated so inhumanely, that they suffer more than they should from the time they’re raised to when they are processed just to satisfy the appetite of consumers.

There is the constant question of whether pigs feel pain when slaughtered. With over 1,100 pigs slaughtered every hour, it’s becoming more difficult for slaughterhouses to treat pigs as humanely as possible and give them painless deaths. Over the years, activists have even released videos of pigs being loaded into cramped, unhygienic trucks, stunned improperly, and left alive when they reach the scalding tanks. The pain and suffering that these animals go through before they die are unimaginable, and that’s a reality that needs to be addressed by businesses, the government, and everyone..

Do pigs cry when slaughtered?

With the inhumane ways used to slaughter pigs just to cope with the high market demand, a lot of slaughterhouse workers report that these animals squeal while being processed at their facilities.

How many pigs are killed each day?

Today, a typical slaughterhouse can kill at least 1,000 pigs every hour. This means that around 121 million pigs are slaughtered for consumption each year.

How are pigs euthanized?

Gassing with high CO2 concentrations is still the most humane method of euthanizing pigs. Through this process, pigs go through the least amount of pain before they are eventually killed as compared to using stun guns, which is now being protested by activists around the world.

How do we help pigs?

As highly intelligent and social creatures, pigs deserve to be treated properly and not just become collateral damage for a growing economy. The first step towards giving pigs this right is for governing bodies to impose stricter rules in raising them. Pigs shouldn’t be kept in restricting pens and gestation crates because they are not herding animals. They need to roam free and grow as naturally as possible. They shouldn’t be rushed into growth just because the demand for them is high.

Here at Juliana’s Animal Sanctuary, we help pigs by rescuing them from abusive owners, giving them a new home, and giving them the love, care, and respect that they deserve.

How can you help them?

The abuse of pigs usually starts in factory farms and in industrial slaughterhouses that prioritize economic benefits more than anything else. But we can stop this by making sure that we support legislation that aims to eliminate these inhumane systems.

We should also support companies that support the humane treatment of pigs. Big brands like Target, Chipotle, and McDonald’s have expressed their support by eliminating farms that use gestation crates. And if you can, it’s best to stop feeding the business of pig farms and slaughterhouses by going vegan. You are not only eating for a better life yourself, but you are also giving life to these animals.

It’s also very important to support animal sanctuaries and shelters, like Juliana’s Animal Sanctuary. We need your help in caring for our pigs and other animals by giving them the treatment that they deserve. For 13 years, we have saved and rehabilitated 700 animals and you can help us save hundreds more by supporting our cause.

You can start by making a donation to our sanctuary, which will be used to rescue, protect, and care for pigs and other animals. We accept donations by check. For more information, check out our donation page.

If you want to make a bigger impact on the lives of our pigs, sponsoring an animal is one of the best ways to go. When you become a sponsor, you are giving one of our pigs the chance to live out their lives and be cared for the proper way.